They all descend from salt, i.e. Latin sal: 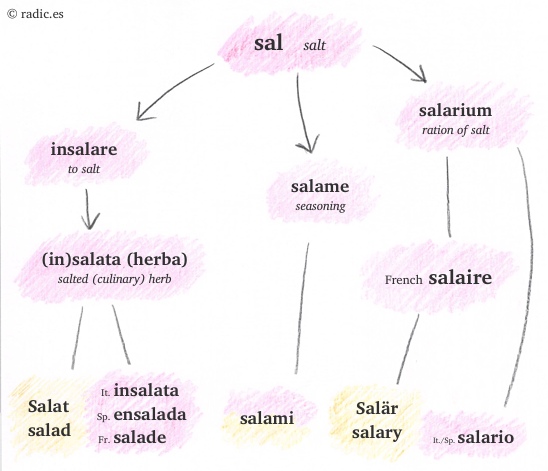 Salad is the result of several derivations and semantic shifts: insalata merely means ’salted‘ — implied is herba (yes, it’s Latin for ‚herb‘). There was a variant omitting the prefix in-. This is the one that is reflected in English, French and German (probably not by accident: unlike Italian and Spanish, it does not collide with the word for ’salted‘).

Salami, as well, is called like that because it’s well seasoned. Salame literally means ’seasoning‘; later, the word was assigned to the thing itself.

Last but not least, salary came into English and German from French. It continues salarium ‚ration of salt‘, which Roman officials and soldiers received for pay (or were able to buy with it).